Virtual Reality is the Way of the Future

Virtual Reality is not exactly a new concept, but advancements in the last decade are helping bring that technology into the mainstream eye. This budding tech is being implemented into dozens of businesses across a variety of industries. Seemingly everyone wants to get in on the VR action and these are the current innovations in this ever-growing market.

Currently the cheapest way to experience VR technology is with Google Cardboard. For $15, you’ll receive a constructible case for your smartphone that will transform it into a virtual reality viewer (think the modern equivalent of a Viewmaster). Google offers a variety of VR experiences through their apps like 360 degree Youtube videos and its dedicated VR app as well as an enhanced version of Street View. At its heart, Google Cardboard is meant to provide a small glimpse into the possibilities this new tech holds to the general public.

Gaming is the first big industry to invest into a VR-fueled future. Playstation is currently developing Playstation VR for their Playstation 4 console and is slated for a fall 2016 release. In addition to the host of exclusive games coming to the new peripheral, existing games are gaining added support, as well. The financial hit Star Wars Battlefront is poised to be among the first previously-released games to welcome VR as one its additional modes. The Oculus Rift was the first VR headset to make a real splash in the community and has added numerous other versions and peripherals since having its Kickstarter was successfully funded in 2012. Two additional motion controllers are available for purchase to enhance the experience further and allow the player to be immersed into their games even more. Video games have been the main focus for the platform, but have promised it will have numerous other functions.

Samsung is bringing Oculus’s technology to the masses with their Samsung Gear VR headset. The Gear VR uses the power of Samsung’s Galaxy line of phones and converts it into a virtual reality experience that showcases the entertainment possibilities VR holds. One of the prominent features is the personal theater inside a virtual living room. While this feature may be redundant to use in your own home, that’s where the portable aspect of the device comes in. It may look silly if you’re commuting by bus or train, but not so much if you’re at a friend’s house and want to catch up on your favorite Netflix shows. The Gear VR also offers a variety of games to show off some of the more intricate experiences like Keep Talking and Nobody Explodes, a cooperative bomb-defusal game, and Land’s End, a calming exploration / puzzle adventure.

With so many possibilities, companies are sure to want to jump on the proverbial bandwagon early to find ways of implementing VR into their businesses. 360 Immersive is a local company that recognizes the full potential of VR and wants to help integrate virtual reality into other businesses to show public how many uses this budding technology can have. They aim to work with companies to find the best way to effectively implement virtual reality into their existing business strategy; if VR is going to be as big as it seems it’s going to be, it will be imperative for organizations to embrace this new approach. By adopting it early, companies can become the frontrunners and set critical examples of how best to utilize this exciting new tool. Huge companies like Youtube and Facebook are committed to embracing VR for the foreseeable future, which is poised to be the next big breakthrough for technology.

Prepare to see a wave of VR experiences in stores across the country in the coming years as it begins to be implemented in more impressive ways. Most headsets are still on the pricier side because the tech is so new, but with more time for improvements, they’ll become more accessible so everyone to get their hands on this immersive new technology. 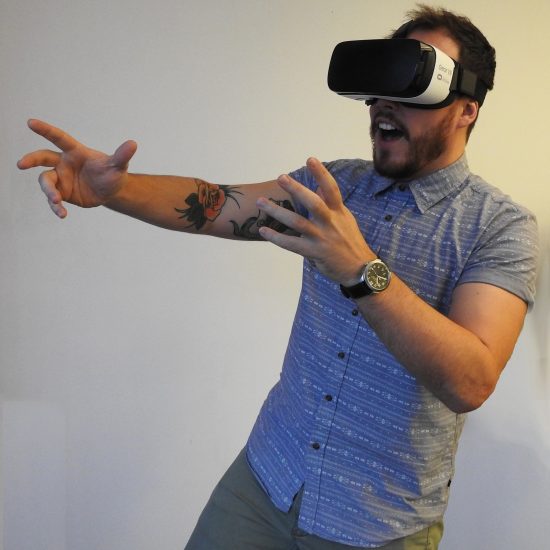